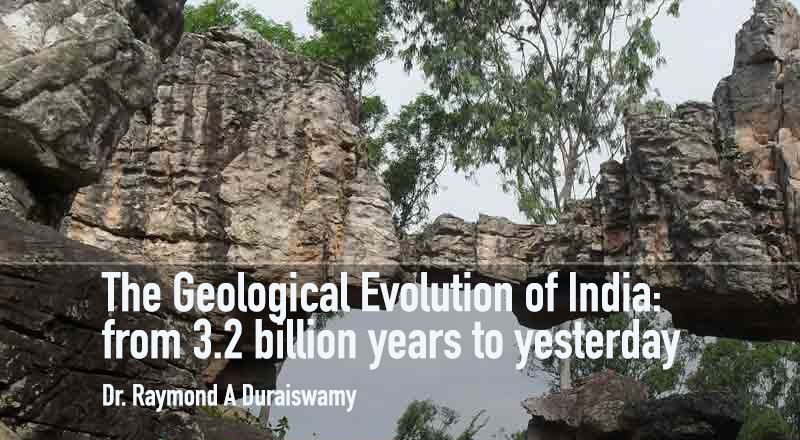 Summary
A Ten part lecture course designed to acquaint students and the curious about the glorious geological history of the Indian sub-continent.

Description
1 – Geology – The language of Mother Earth
Introduction to the uniqueness of the Earth System
The participants will be introduced to fundamentals of the Geology and include topics like the formation and internal structure of the earth, geochemical differentiation formation of different spheres of the earth.

2 – Geologic time scale – Evolution of Life through the ages
How old is the Earth?
Concepts such as relative dating, order of superposition, dating techniques and the Geological Time Scale will be presented. The participants will also be appraised of the evolution of different life forms through the ages.

3 – Volcanism on Earth – The Prime Mover
Volcanism, types and how they control climate?
The participants will be introduced to types of volcanism, and their role in climate change

5 – Geology of India – Unity in Diversity
Collage of different cratons
The participants will be apprised of the various cratons and important geological provinces of India.

6 – Archaean volcanism in India
Komatiite lavas and basalt pillows in Indian Peninsula*
Komatiite are special high temperature fluid lavas that were produced at about 3.2 billion years ago and never formed again in earth history. The participants will be given a glimpse of this unique volcanism in Indian peninsula.

8 – Gondwanaland
Story of the Indian coals
India along with South America, Africa and Antarctica formed Gondwanaland in the southern hemisphere. During this time the continents experienced glacial to humid to arid environments as the India travelled to the northern hemisphere. The participants will be given a glimpse of this unique sedimentation during which coal formed on all continents.

9 – Indian Ophiolites in the Himalayas- the story of ancient seas
Unique slivers of the neo-Tethyan sea
The participants will be appraised on the slamming of the Indian plates with Tibet and formation of the Himalayas.

**10 – Subaqueous volcanism in Mumbai **
Cretaceous-Palaeocene eruptions
The geology of Mumbai probably represents last phase of the Deccan Traps volcanism that is related to global mass extinctions, including that of the Dinosaurs. The lecture covers the unique geology and geodynamic setting of the Mumbai Islands.

Dr. Raymond A. Duraiswami
Dr. Raymond A. Duraiswami completed his graduation from Nowrosjee Wadia College, Pune in 1992 and post-graduation and Ph.D. from the Department of Geology, University of Pune in 1994 and 2008 respectively. His Doctoral work was on the mantle xenoliths in alkaline plugs from Kachchh, Gujarat. He worked as Project Assistant (1994-96), DST-JRF (1996-98) and CSIR SRF (1998-2000) before joining Groundwater Surveys and Development Agency, GoM as Junior Geologist (2000-2009). He presently works as Assistant Professor at the Department of Geology, Savitribai Phule Pune University, Pune and has varied interests in igneous petrology, physical volcanology and hydrogeochemistry of groundwaters from the Deccan Traps and associated formations. He has co-edited 5 books and has published 73 papers in national and international journals. His interests include Physical volcanology and hydrogeology of the Deccan Traps, India and study of ophiolites from Himalayas and Andaman and Nicobar Islands.

Of late, he is concerned about geo-environmental issues, climate change and disasters. The hot springs from the Himalayas and Sahyadri and their economic exploitation are of special interest to him. In India, he has worked in diverse terrains such as the Higher Himalayas of Ladakh and Karakoram, Sikkim, Andaman Islands, Thar desert and salt flats of Kutch. He has also visited countries like Malawi, Iran, Norway, Sweden, Georgia, France, Germany and Netherlands in connections with geological mapping and academic discourse. He is a Fellow and Life Member of Professional organizations like Geological Society of India, Bangalore; Indian Science Congress Association, Calcutta; Gondwana Geological Society, Nagpur; Wadia Institute of Himalayan Geology, Dehradun; and Indian Society of Geometrics. He has guided 3 students for their Doctor of Philosophy (Ph.D.). At present 8 Ph.D. research scholars working on diverse geo-environmental topics related to the Deccan Traps and the Himalayas are registered under his guidance.

Lastly, Raymond is a die-hard foodie, loves travelling to remote corners and is found of discussing geology!